Energi People Get Into Formula 1 In Barcelona

David Routh shares a recent trip to Barcelona with some of the Energi People team – a reward for hitting target and an incentive to keep up the good work! 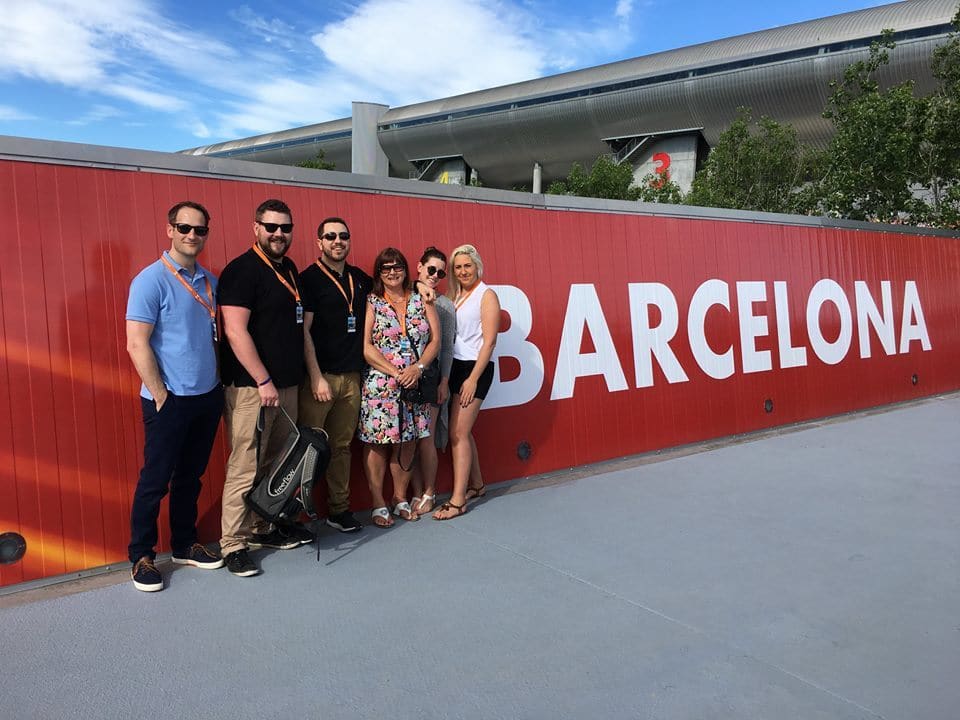 For those of you that didn’t see the social media updates, Kat Jefferies, James Mowat, Sarah New, Marcia Boverhoff, Nick Rothery and myself all visited Barcelona recently – courtesy of Energi People. The background to this is that Energi People runs a theme each financial year for our target rewards. For April 16 to March 17 the theme was the Formula 1. More on this later…

To get a chance to go on this trip each individual consultant had to bill £120,000 over the 12 month period. Nick, Kat and I successfully did so. James Mowat was offered a wild card seat due to his 11 years of service and Sarah New was also offered a wild card due to billing £90,000 in the last 6 months of the year! Marcia is our Finance Manager who makes sure we all get paid on time so she was OBVIOUSLY getting a place!

So the first thing I need to say a HUGE thank you to all of the clients and candidates who worked with us last year. We literally couldn’t do it without you. I genuinely enjoyed working with all of you and I look forward to many years of continuing to provide our services to you.

So we left for Barcelona on Friday 12th May from Gatwick (the company obviously picking up the tab for travel) at 14:20. We were really touched that Energi People had arranged a reserved area in the airport lounge with free drinks and food (and sweets that may or may not have been raided for the flight).

Touching down in Barcelona late afternoon I found it absolutely amazing. If you haven’t been before, as you land you’re treated to some amazing views as the airport is situated just next to the coast, and you fly in from across the sea. I had a relatively, painless baggage claim followed by meeting the Motor Sport team who were running our Formula 1 weekend and transported us to the hotel.

The hotel. Wow. We stayed at the Hotel Claris, a five-star Grand Luxe hotel located in Barcelona’s central Eixample neighbourhood, just steps away from Passeif de Grácia, a street that boasts the city’s most famous shops. Half art gallery, half hotel this place was gorgeous. The sangrias are not bad either! A nice little end to the first day. Day 2 involved an introduction to F1 (not being a fan normally) with a coach picking us up from the hotel and taking us to the track with a short walk to the Silver Member village. This is situated on the final corner overlooking the main straight, where I enjoyed a second breakfast (the first being at the hotel). Food and drink were gratis thanks to the package and I availed myself fully! Then we were treated to the GP3, Porsche Mobil 1 Supercup and F1 qualifiers, F2, GP3 and Mobil1 Supercup races going on until early evening. If you haven’t been then take my advice and don’t use the earplugs they give you. The sound of these cars going by is glorious.

Then it was back to the hotel for a shower (which was hands down the best part of trip, water just fell from the ceiling) and then out for sangrias and food (again generously paid for). Get used to eating late like the Spanish. I think I actually got my food at 10pm but to be fair as I had been demolishing the buffet for most of the day it wasn’t that much of a hardship! Day 3 was the big event. The Formula 1 race. You could literally feel the change in atmosphere. Despite not being a fan on most days of the year, being there made you feel like you need to pick a side and back them (#teamhamilton). Everyone was crowding to the front (the girls ran ahead and grabbed the last table! Lifesavers). The race itself was amazing. So much passion from the Spanish and English fans was brought to the fore. When they were finished on the track we got to go on it and walk the road they had just been driving on!

After the race I again made my way back to the hotel where I promptly discovered that the Scottish half of me had been at the fore that day and that 8 hours in the sun drinking nothing but Estrella all day was the quickest way to heat stroke! So after dinner I promptly fell asleep and missed what seemed to be an amazing night out in Barcelona. I was more than a little smug the next day as we were flying and the rest of them looked like the cast of The Hangover. On our last day we had a morning stroll around Barcelona’s main streets with a Starbucks (creature comforts) and a nice breeze. Then off to the beach (just a heads up – it’s 10 Euros for each umbrella and sunbed you use on the beach!) then back to the hotel for pick up. Feeling a genuine bit of remorse on having to leave (possibly brought on by the torrential rain we were hearing about back in the UK) it was onto the plane and back to Gatwick. Then of course back to work on the Tuesday.

No rest for the wicked, but we’ve got a great incentive to hit target this year as the theme is… Casinos!

“Harry is a professional Structural Engineering Recruiter, with a wide experience and extensive knowledge in the engineering and construction market. Harry has an exceptional ability and expertise to quickly recognise a candidates experience, qualifications and credentials that matches the most appropriate position specification. A conscientious person, he is highly motivated with good communication skills and interaction with people. I am very pleased to have had the valued assistance of Harry to successfully secure my latest Associate Director position.“

“I have known Emily for quite a short time, but long enough to impress me. It was the first time I felt that a recruiter knew well what I was looking for. She found me an excellent start to begin my dreamy Structural Engineering journey. Moreover, she looked after me, helped me prepare for the interview and gave me fantastic support. I wish everyone to meet a person like her who genuinely wants to provide a chance for excellent career development and can perfectly match the people and companies. Thanks once again, Emily!”

“I would highly recommend speaking with Portia for all your recruitment requirements. She is a great communicator and really listens and understands the specific detail requirements of a prospective candidate you need for your team/business and without doubt she has a tenacity to get the job done.”